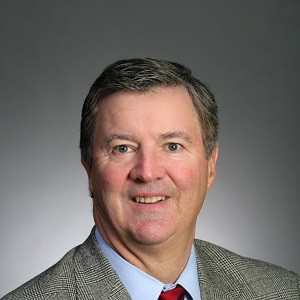 Dr. George W. Holcomb, III was born in Osaka, Japan on December 11, 1953.  He was raised in Nashville, Tennessee and attended elementary and high school in Nashville.  He attended the University of Virginia for college and then Vanderbilt University School of Medicine. His general surgery training was at Vanderbilt and his pediatric surgery training was at the Children’s Hospital of Philadelphia.  He began his pediatric surgery practice in 1988 as an Assistant and subsequently Associate Professor of Surgery in the Department of Pediatric Surgery at Vanderbilt. In 1999, he was recruited to replace Dr. Keith Aschraft as Surgeon-in-Chief and the Katharine B. Richardson Professor of Surgery at Children’s Mercy Hospital in Kansas City, Missouri. From 1999-2011, he also served as the Program Director of the Pediatric Surgery Residency Training Program. In addition to being the Surgeon-in-Chief, he is also Senior Vice-President and Director of the Center for Minimally Invasive Surgery. In 2002, he was awarded a Masters in Business Administration (MBA) from the Henry Bloch School of Business at the University of Missouri-Kansas City.

Dr. Holcomb is a member of the American Pediatric Surgical Association, the American Surgical Association, the British Association of Pediatric Surgeons, and the European Pediatric Surgeons Association, among others. From 2008-14, he served on the Residency Review Committee for Surgery which accredits the general surgery and pediatric surgery residency training programs in the United States. He is best known for his interest in minimally invasive surgery in infants and children and his emphasis on evidence-based medicine.  He is the author of over 250 peer-reviewed publications and 60 book chapters, and has been an editor of 8 textbooks. He has been asked to give 25 visiting professor lectures in the United States, and over 60 presentations at international congresses. In 2017, he was selected to be the fourth Editor-in-Chief of The Journal of Pediatric Surgery.