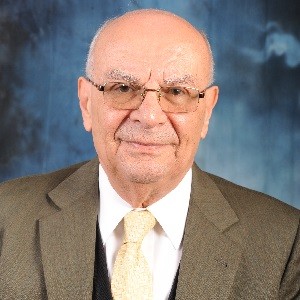 Dr Nabil Kronfol is a Professor of Health Policy and Management and the Founder of the Lebanese HealthCare Management Association, a not-for-profit professional association that focuses on the further development of policies and health systems in Lebanon and the MENA Region. He is also a co-founder of the “Center for Studies on Ageing” in Lebanon and the MENA Region.

Born in 1944, in Beirut, Lebanon, Dr Kronfol received the medical degree with the Penrose Award from the American University of Beirut (AUB) in 1969. Following residency training at AUB and at the Harvard’ Children’s Hospital in Boston, United States,  Dr Kronfol became a diplomate of the American Board of Pediatrics in 1972. Dr Kronfol then joined the Harvard School of Public Health in Boston and was graduated with a Doctorate in Public Health in Health Services Administration.

Dr Kronfol joined the American University of Beirut in 1974 and moved through the academic ladder to become full Professor, Chairman of the Department of Health Services Administration (now Health Policy and Management), Assistant Dean for Allied Health and finally Deputy Vice President for External Programs in Health.

While on the professional tenure, Dr Kronfol established the College of Health Sciences in the State of Bahrain, four schools of nursing in the United Arab Emirates and the Planning Unit at Lebanon’s Ministry of Health. He also played a key role in the establishment of several faculties of Medicine and Public Health in the MENA Region.

Dr Kronfol received the International McGaw Award in 1984, the Fullbright International scholar Award in 1985 and lately the Shusha Award from the World Health Organization (2007). He is a member and past president of the Alpha Omega Alpha Honor medical society and the Sigma Phi science society.

Dr Kronfol served as chief advisor to Lebanon’s Ministers of Health (since 1980), to the Minister of Health of the United Arab Emirates (1992-1995), and continues to be a frequent consultant to the World Health Organization, the World Bank, UNICEF, UNDP, ESCWA – in health systems design, human resource development, quality assurance and the health of the older populations. Dr Kronfol was also one of the founders of the Arab Board for Medical Specializations. He served for ten years as a member of the Board and the Chairman of the Program Committee of the Board of the Aga Khan University.

Dr Kronfol has an extensive list of publications and books.