How do we deal with severe Healthcare Associated Infections (HAI’s) and the danger of antimicrobial resistance in the future?

Through the Covid-19 pandemic autonomous UV-C disinfection has proven to be an effective tool against dangerous pathogens including, but not restricted to, Covid-19. But what does the future hold within UV-C disinfection? 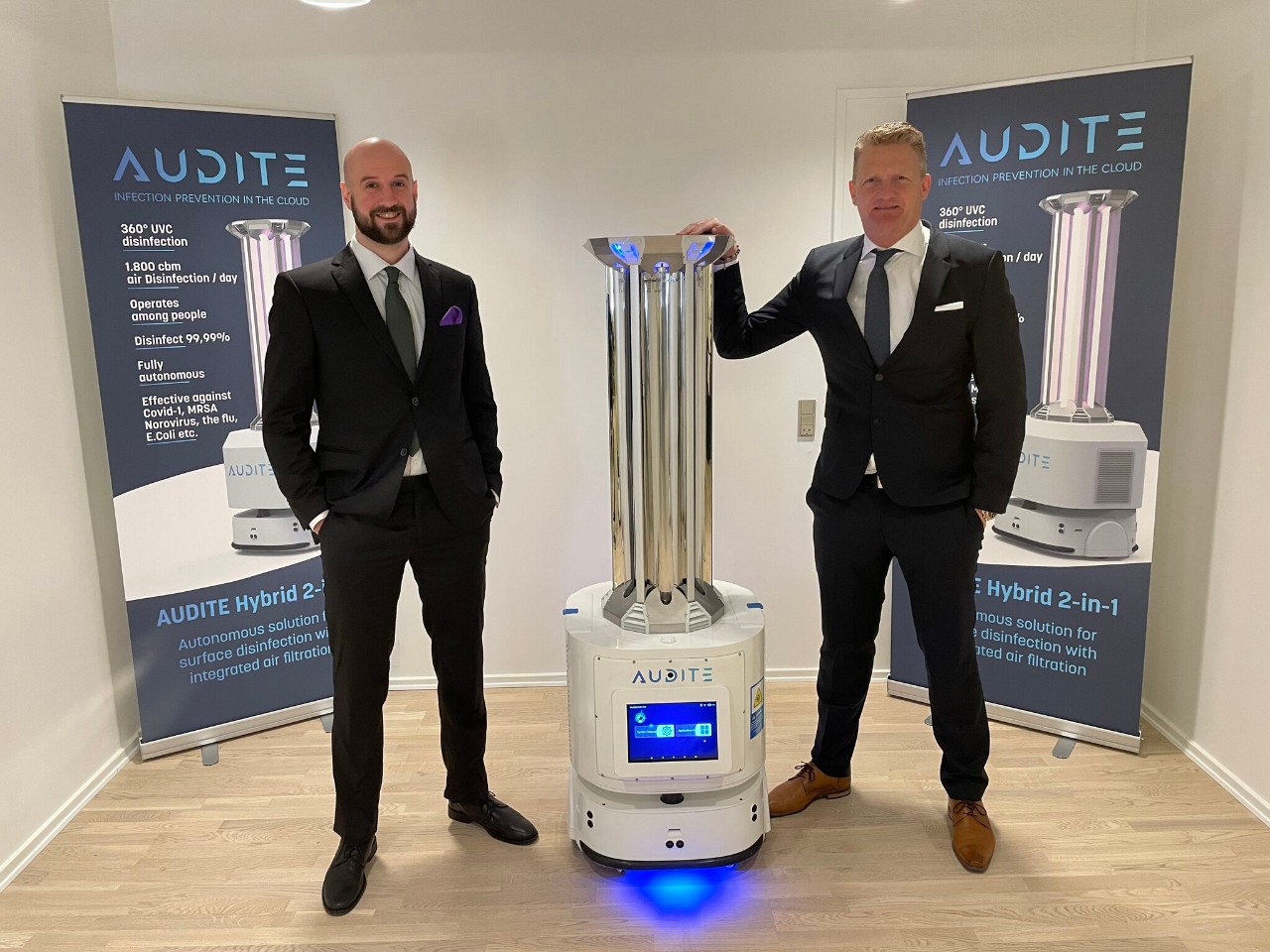 At Arab Health 2022 in Dubai, Autonomous Disinfection Technologies (AUDITE) will be showcasing the brand new AUDITE UV-C Hybrid Robot, which is a FULLY AUTONOMOUS UV-C robot that ALSO disinfects the air. With an independent air filtration and germ inactivation system, the robot can move around disinfecting the air freely around people without hurting anyone.

The robot drags in 3000 liters of air pr. minute through two large filters, which then passes by two additional inner UV-C tubes that eventually destroys the remaining microorganisms in the air. According to CEO Jacob Sohrabi Niclassen, this is a major innovation towards safer use of UV-C light for infection prevention:

“This innovation makes is possible to operate while people are present in a room or in the hallway. Something that has not been possible until now. The robot is also fitted with 6 outer UV-C bulbs that perform a 360 degrees disinfection that allows it to reach a 99,99% surface disinfection rate.” According to Jacob “the possibility of disinfecting both the air and surfaces in a single, fully autonomous solution is a great step towards cleaner hospitals and less deaths caused by preventable HAI’S”.

For CTO Hans Peter B. Nielsen, formerly a part of the successful UVD Robots, it has been a long journey that has provoked multiple technical considerations:
“This innovation performs better than any other robot I have worked with on three key parameters – safety, efficiency and autonomy. Being able to disinfect the air effectively through an independent system sets a new safety standard for UV-C robots and raises the bar for what UV-C robots can do. Also, we have insisted that the robot should be 100% autonomous to be of any value for hospitals around the world. Who wants an autonomous robot, that needs to be followed around wherever it goes?”

To see this new innovation for yourselves we would be very pleased to welcome you at our stand at the Pavillion of Denmark, SA.C57. Together with our distributor we will be showcasing the AUDITE UV-C Hybrid Robot, which was released October 1st 2021, for the first time in the Middle East – and we also promise to ensure clean and disinfected air for everyone who stops by our stand.

Autonomous Disinfection Technologies are based in the city of Odense, Denmark, which is home to one of the fastest accelerating and most influential robot clusters in the world right now. AUDITE was founded with the ambition to prevent cross contamination and healthcare associated infections with technologically superior, user safe and effective autonomous solutions. With our new innovative air disinfection solution, the use possibilities are endless.

The future may very well be hybrid.