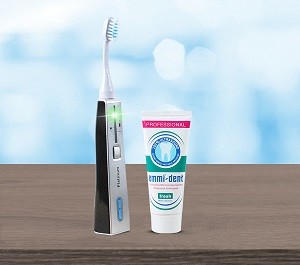 Moerfelden-Walldorf, 02nd January 2020: Emmi Ultrasonic GmbH presents the ultrasonic toothbrush emmi®-dent Platinum. The toothbrush with the revolutionary head that makes it easier to brush your teeth and ensures optimum cleaning of your teeth. Ultrasound waves penetrate into the smallest gaps and clean effectively and permanently interdental spaces, fissures and periodontal pockets without mechanical pressure. The patented ultrasound technology works without a motor, rotating movements or beeps and makes brushing teeth a pleasant experience.

The ultrasonic toothbrush emmi®-dent Platinum ensures clean teeth and is available in six different versions - so everyone will find the perfect model for themselves and the rest of the family! A special highlight is the world novelty emmi®-dent Platinum Care. Especially for people with disabilities, it is a particularly easy solution for perfectly groomed teeth.

The toothbrush with the smart brush head

The worldwide patented "Piezo-Chip" in the brush head of the emmi®-dent Platinum generates the ultrasound, and directs him with up to 96 million air oscillations per Minute directly into the specially developed emmi®-dent ultrasonic toothpaste. Micro-bubbles form and clean the teeth thoroughly without brushing, while preserving the gums. The result is a feeling of smooth teeth, a long-lasting freshness in the mouth as well as the effective removal of bacteria. The effective, "non-brushing" is removal of Plaque and impurities, especially for people with sensitive teeth and sensitive gums, as well as for wearers of braces and prostheses, ideal.

The emmi®-dent Platinum ultrasonic toothbrushes also make a visual impression. The modern, square shape ensures perfect Handling: the toothbrush is well in the Hand, can be stored comfortably and remains standing safely. Its aluminium veneering also makes it a real eye-catcher. The emmi®-dent Platinum series is suitable for anyone looking for optimal daily prophylaxis. Due to the intensive and gentle cleaning, it is particularly suitable for children, seniors as well as wearers of braces or implants. The products were tested by the ORMED Institute for Oral medicine at the University of Witten/Herdecke clinically. They are available in six versions and are therefore perfectly adapted to all needs.

emmi®-dent Platinum or Metallic Kids-Set
The Set for perfectly groomed children's teeth: in addition to the emmi®-dent Platinum in blue, are two emmi®-dent Kids ultrasonic dental creams, a pack of emmi®-dent S2 ultrasound-essays for children, emmi®-dent 100-240B type charging station, as well as, the cute, small stuffed animal Emmifant. This makes it fun for children brushing their teeth right from the start! Also available as a Metallic base Set in Marine blue with the same scope of delivery.

EMAG AG/Emmi Ultrasonic GmbH specializes in the research, development, production and distribution of products of the latest ultrasonic and ultraviolet technology.

The product range includes ultrasonic cleaning equipment for cleaning the smallest parts for industry and trade as well as UV light curing equipment from Emmi®-Nail for professional nail Studios. For end-users, the sales company of EMAG AG, emmi®-ultrasonic, emmi®-dent and emmi®-pet micro-tooth cleaning devices and emmi®-skin micro-massage devices are manufactured on the basis of ultrasound. Application-specific cleaning liquids and preparations complete the extensive range.
These innovations are based on the group's extensive experience in the areas of ultrasonic cleaning equipment for hospitals, ultrasonic engine cleaning in racing (including Ferrari) and industry (for Ford automobiles) as well as ultrasonic engine cleaning baths in aviation (for Lufthansa and Air France).
EMAG AG has more than 20 self - researched patents worldwide as well as its own research and Development Department and is certified according to the new regulations of DIN EN ISO 9001. Managing director Cüneyt Emekci founded the globally operating company in 1999. In addition to the head office in Moerfelden-Walldorf (Frankfurt/Main) with currently almost 75 employees, there are other European locations.