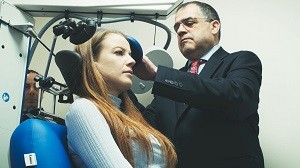 Patients from overseas, including the Middle East, may be able to access rapid treatment protocol, over a period of two weeks

Depression is the leading cause of ill-health and disability worldwide. It causes a great deal of suffering and can be fatal. According to latest estimates from the World Health Organisation, more than 300 million people are living with it.

Psychotherapy and medication are the ‘first line’ treatments, and in England alone, the number of prescriptions for anti-depressants has almost doubled in the past decade. Data from NHS Digital, the Health and Social Care Information Centre for England’s state-funded National Health Service, shows that 70.9 million prescriptions for anti-depressants were given out in 2018, compared with 36 million in 2008.

But while medication is beneficial for many, it is not a catch-all. This is why  the Priory’s Wellbeing Centre is offering an effective, evidence-based, alternative biological treatment that has been approved by the National Institute of Clinical and Health Care Excellence (NICE).  Improvement can be seen by some patients in as little as two weeks.

“Medication is not effective in up to 50% of patients, not everyone wants to take pills, and some people have unacceptable adverse effects,” says Dr Leon Rozewicz, the medical director of Priory’s Wellbeing Centre in Harley Street, the renowned medical area in central London.

Dr Rozewicz says. “If the first anti-depressant medication you try does not work, the next one is less likely to work. Once you have tried three medications for depression, the probability that the fourth will work is about 15%.

“Rapidly alternating magnetic pulses are generated over the scalp, which stimulate specific brain regions involved in depression. The aim is to increase the connectivity of brain cells. The method may be used alongside medication or without medication.

“The process requires no anaesthetics or sedatives. It causes no sedation and no memory loss.”

rTMS has been tested in several hundred clinical studies worldwide and evidence shows a high and positive response rate. NICE assessed rTMS by looking at the outcomes of seven particular studies which involved more than 6,000 patients. They concluded that rTMS was both safe and effective. In 2007, NICE approved it as a treatment of depression. The U.S. Food and Drug Administration has also approved rTMS.

“Patients who have failed to achieve an adequate response from anti-depressants, or who are unable to tolerate medications, should definitely consider rTMS,” says Dr Rozewicz.

“If you come in with a depressive illness and you get medication, the response rate to that medication is about 40%-50%. In studies of anti-depressant effectiveness, 20-30% of people will just drop out. In rTMS studies, less than 5% drop out. People tolerate it very well. It’s also more effective than anti-depressants in what we call ‘treatment-resistant’ depression. The other part of the story is that it doesn’t really have adverse effects. You get some minor discomfort during treatment and you may have a mild headache for one to two hours afterwards.

“Unlike ECT (electroconvulsive therapy), no current passes through your head, there is no electric shock. It does not require an anaesthetic, you can resume all usual activities (including work and driving) immediately at the end of a treatment session.”

The Priory Wellbeing Centre has invested £100,000 to integrate the state-of-the-art rTMS equipment into its Harley Street location.  A specialist team of staff co-ordinate and manages the rTMS programme, and support patients closely through the process.

The Priory Group is the world-famous independent provider of mental healthcare with hospitals, rehabilitation centres and Wellbeing Centres across the UK, and a Wellbeing Centre in Dubai.

This year they will be attending the Arab Health Exhibition & Congress as part of the Harley Street Medical Area Stand on the UK Pavilion. The global exhibition is taking place from 27-30 January 2020) at the Dubai Convention and Exhibition Centre.

The Priory Wellbeing Centre in the UK is located within the Harley Street Medical Area, London - an area famed for its medical excellence in treating complex and life-threatening conditions. The area, managed by long-term landlord The Howard de Walden Estate, brings together a community of world-renowned medical professionals.

A video of the treatment is available to watch here, and includes an interview with Dr Rozewicz: https://www.youtube.com/watch?v=Yo0xGoOCqAw