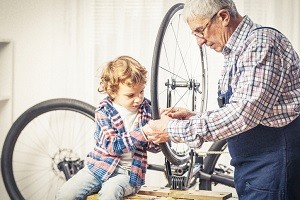 A leading UK clinic is changing the future for Middle Eastern patients who suffer with memory loss and other symptoms of cognitive impairment.

Dementia, including Alzheimer’s disease, is one of the biggest global public health challenges facing our generation. Over 35 million people worldwide currently live with the condition and this number is expected to double by 2030 and more than triple by 2050 to 115 million.

The pioneering brain and mind clinic say results from international clinical trials are bringing us ever closer to treatments to slow down or, ideally, halt the progression of the disease and to improve its symptoms.

Involvement in clinical trials enables individuals, with residency in the country where the trials are taking place, to get early access to the next generation emerging medications, free of charge, before these medications are licensed for global use.

Those participants enrolling at a Re:Cognition Health Centre receive outstanding medical care and are monitored, regularly, throughout the study by a team of cognitive experts. As the pharmaceutical company covers all medical costs, the very best care and medical facilities are provided at no cost to the individual.

Dementia, including Alzheimer’s disease, is one of the biggest global public health challenges facing our generation. Over 35 million people worldwide currently live with the condition and this number is expected to double by 2030 and more than triple by 2050 to 115 million.

In 2008, the World Health Organization (WHO) declared dementia as a priority condition through the Mental Health Gap Action Programme and revealed that the Middle East and North Africa will see a 125 percent increase in cases by 2050. Almost 6 percent of people over 60 are suffering from Alzheimer’s.

Dr Emer MacSweeney, CEO and Medical Director of Re:Cognition Health commented: “With the introduction of new biomarkers to detect evidence of Alzheimer’s disease at its earliest stage, there is reason for cautious optimism that new generation medications will delay progression of disease and also boost cognition.”

“Just as research through clinical studies has improved our outlook for numerous diseases including previously fatal infections and certain forms of cancer; the same action is being taken today for Alzheimer’s disease. With every study conducted we understand more about the disease and become closer to finding treatments, and ultimately, a cure.”

Re:Cognition Health is located in the Harley Street Medical Area, London - an area famed for its medical excellence in treating complex and life threatening conditions.  The area, managed by long term landlord The Howard de Walden Estate, brings together a community of world renowned medical professionals.

At Re:Cognition’s premises, behind the Georgian facade lays the latest in cutting edge medical technology. The Harley Street area is proud to offer unique and complex surgeries performed by renowned surgeons, and many world class practitioners for the overall management of recovery and health of patients.

The Arab Health Exhibition & Congress is the largest healthcare exhibition in the Middle East. It is taking place from 29th January to the 1st February 2018, at the Dubai Convention and Exhibition Centre.

The Harley Street Medical Area Stand will be located in the UK Pavilion in hall 7 Stand E30. Re:Cognition representatives can be found on the stand.