Among adverse events to contrast media (CM), immediate hypersensitivity (IH) reactions raise the highest level of concern for radiologists and patients, since they may lead to severe anaphylactic shock within minutes after injection, sometimes leading to death. The frequency of reactions to iodinated CM (ICM) was reduced with the use of non-ionics in the 90s, but not the frequency of death. Numerous pre-treatment protocols have been implemented, but their overall efficacy remains unclear.

Gadolinium chelates used as contrast agents for Magnetic Resonance Imaging were initially thought to be safe and to induce less adverse reactions than iodinated agents. This is probably true for mild reactions, since the osmotic load of a regular gadolinium chelate injection is four times lower than an iodinated contrast one. 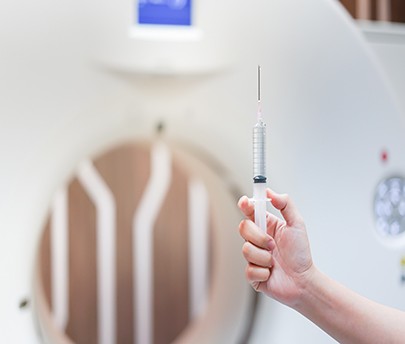 However, severe reactions and cardiovascular arrests have still been described with all the gadolinium chelates available on the market, leading to similar pre-treatment strategies despite the lack of evidence supporting them.

For decades, a true allergic mechanism was discounted by the community, who have advocated non-specific, so-called “anaphylactoïd” or “pseudo-allergic” reactions and identified risk factors such as “previous reaction”, “asthma”, and “allergy to drugs”. Several pre-treatment protocols have been tested, mainly based on antihistaminic drugs and corticosteroids. However, these do not prevent severe reactions and anaphylactic shocks.

Over the last 20 years, cumulative evidence has been published in literature about the involvement of a true allergic mechanism in some IH reactions to contrast material for iodinated agent and a few cases have been reported for GBCM.

It is important to differentiate allergic from non-allergic reactions, because allergy implies immune memory of the epitope, and recurrence (even at very low doses) with the culprit CM and potentially with other CM containing the same epitope (cross-reactivity).

Drug allergy is associated with increased tryptase and histamine concentrations in plasma during the first hours of the reaction and is diagnosed by positive intradermal skin testing with diluted drug solutions.

Most of the published studies included retrospective cases tested years after the reaction, or lacked precise clinical history, name of culprit agent, or were mixed immediate and delayed reactions.

In France, we conducted the first prospective study of IH reactions to iodinated or gadolinium-based agents (CIRTACI study). It needed to be multicentre, since the incidence of severe reactions is so low, in order to include a few hundred reactions over the term of the study. Based on an incidence of 0.1 per cent moderate and severe reactions, we included 31 centres from across France that were able to provide allergy testing shortly after the reaction. We assumed that each centre could perform at least 7,000 injected examinations per year, meaning that 600,000 examinations could be obtained over a three-year period, so that we could include 600 reactions.

However, after two years, the inclusion rate was lower than expected, and we decided to continue the study for a total of 4.5 years. Between 2005 and 2009, 319 patients presenting with IH reactions to iodinated or gadolinium-based contrast media were included. After appropriate medical treatment, blood sampling for histamine and tryptase measurements was performed, and six weeks later an appointment with an allergist for skin testing was organised. All 10 iodinated and five gadolinium agents on the French market were tested.

The group called “Potentially Allergic” presented clinical symptoms and concentrations of histamine and tryptase intermediate between those of the allergic and non-allergic groups, suggesting that some allergic patients are missed when using the recommended skin testing criteria.

This prospective study shows that allergy is responsible for 21 per cent (and possibly more) IH reactions to contrast agents. Allergic patients are at high risk of recurrence if skin-test positive contrast media (culprit or non-culprit) are administered. Patients who have experienced life-threatening reactions and cardiovascular symptoms in particular should be managed with the highest care, as they are most probably allergic to one or more other contrast media.

A systematic follow-up of the patients experiencing IH reactions would vastly improve the safety of patients, by blood sampling rapidly after the onset of the reaction to measure histamine and tryptase, and then by sending the patient to an allergist with competence in drug allergy, in order to perform skin tests. The culprit agent should be contra-indicated for life, together with the other agents inducing skin cross reactivity.

These results strongly support reorganisation of radiology departments, with better identification of previous reactors, elimination of systematic premedication, availability of sampling kits with needles and vials on resuscitation trolleys, and identification of drug allergists to send reacting patients within one to six months following the reaction.