Deformation plagiocephaly (DP) and craniosynostosis (CS) are the leading causes of abnormal head shape in infants worldwide. Accurate differentiation of these two entities is important because their treatment is entirely different. Prompt diagnosis is important because recommended treatments for both DP and CS are most effective when started early.

Medical teaching in the 20th century often suggested watchful waiting of abnormal infantile head shapes, with referral to a specialist only if the head shape did not improve during the first year. The advantages of minimally invasive surgical techniques to treat CS encourages providers to change that practice pattern because these techniques are best utilised in young infants, typically between two and six months of age. 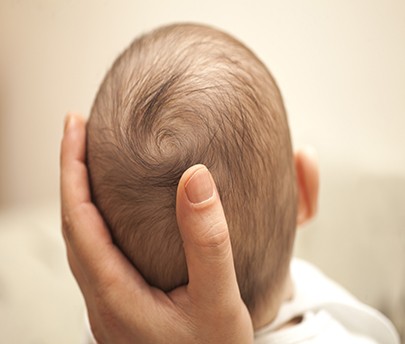 Here we describe typical features of DP and CS; we emphasise ways to distinguish them and outline the typical treatment options.

Normal infantile head shape can vary widely and is largely influenced by familial tendencies and genetic heritage. In this paper, we describe the most common head shape abnormities that fall outside cultural norms: deformational plagiocephaly (DP) and craniosynostosis (CS).

DP is now the most common infantile head abnormality. The 1992 “back to sleep” programme resulted in a 40 per cent reduction in sudden infant death syndrome but there has been a concomitant dramatic increase in DP. The prevalence of DP was estimated as low as 5 per cent prior to 1992, but recent studies estimate a 21 per cent to 46 per cent prevalence in infants less than one year of age, depending on the criteria used to define DP.

CS, which occurs in approximately one in every 2,000 to 2,500 live births, is much less common than DP. Differentiating DP from CS can be difficult for healthcare providers who don’t specialise in head shape abnormalities, especially when the deluge of patients with DP overwhelms a healthcare system’s ability to adequately assess abnormal head shapes.

DP, also referred to as posterior positional plagiocephaly, positional moulding, occipital plagiocephaly or plagiocephaly without synostosis, is usually not present at birth, is often associated with torticollis, and results in a flat posterior skull, with associated anterior displacement of the ipsilateral ear and forehead. CS is typically present at birth, is not usually associated with torticollis, and results in a widely variable but predictable pattern of head shape abnormalities.

Skull x-rays and/or CT scans were previously relied upon to differentiate DP from CS, but the sheer volume of DP patients and concern about radiation exposure in infants and children make these imaging studies impractical CS screening tools for all patients with abnormal head shapes.

Fortunately, patients with CS have a typical appearance, based on the observation of Virchow in the mid-19th century, that skull growth is perpendicular to each cranial suture. Early cranial suture closure therefore leads to predictable head shapes. Multiple suture craniosynostosis also occurs, in the presence or absence of an associated syndrome, with resulting head and face shapes that are characteristic and readily differentiated from DP.

Early closure of midline cranial sutures is differentiated from DP because the resulting head shape is not posteriorly asymmetric, a hallmark of DP. Sagittal craniosynostosis, by far the most common form of CS, results in a long, narrow head with a shortened biparietal diameter (dolichocephaly) as a result of early closure of the sagittal suture, with compensatory growth of the remaining sutures resulting in frontal and occipital bossing. Early closure of the metopic suture leads to a triangular head shape (trigoncephaly) and close-set eyes (hypotelorism), features also not seen in DP.

CS that results from early closure of the coronal and/or lambdoid sutures is more difficult to differentiate from DP because unilateral closure of one of these sutures leads to an oblong head shape, which can be mistaken for DP. Coronal CS is more easily differentiated from DP because the anterior skull is severely affected, the posterior skull is often relatively spared, and there are associated severe asymmetries of the orbital rim and the nose (tip of the nose deviates away from the affected coronal suture), all features that are quite different from the mild forehead asymmetry typically seen in DP (Figure 1). 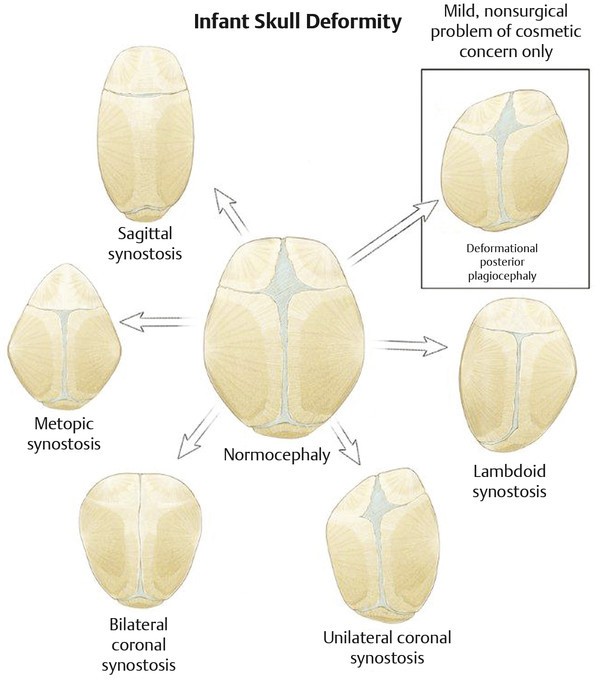 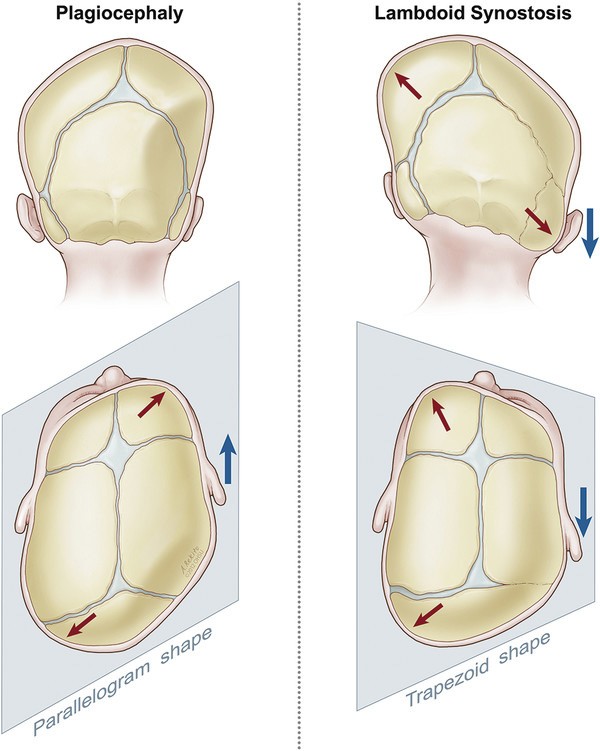 Differentiating lambdoid CS from DP is more difficult because early closure of a single lambdoid suture results in flattening of the back of the skull, which can appear similar to DP. However, important morphologic differences can help the clinician differentiate the two entities in most circumstances. Early closure of the lambdoid suture leads to posterior and inferior displacement of the ipsilateral ear, the opposite of the situation in DP. As a result, the head shape, when viewed from the top, is similar to a parallelogram in DP and trapezoidal in lambdoid CS (Figure 2). In addition, the head of a child with lambdoid CS often looks “windswept” when viewed from the front, meaning that the contralateral parietal bone tends to be higher than the affected side.

Lambdoid craniosynostosis is quite rare, comprising less than 2 per cent of all cases of CS, resulting in only a small proportion of infants with posterior skull flattening being afflicted with lambdoid CS. There is a common misconception that early fontanel closure should be used as an indicator of CS.

The anterior fontanel does close early in some forms of CS, especially those with multiple suture CS or a genetic syndrome, but the fontanel can close at the typical period of development in infants with CS, even those involving the sagittal suture. Similarly, head circumference measurements are not typically reduced in most patients with simple, single suture CS, which make up the majority of children with CS. In fact, in patients with isolated sagittal CS, which accounts for over half of all patients with CS, the head circumference tends to be larger than average because the skull takes on a long, narrow appearance in order to accommodate the normal underlying brain growth. Ridging along the metopic suture, without the associated trigoncephaly or hypotelorism of metopic CS, is often a normal variation that does not require treatment.

Evaluation and Treatment of Deformational Plagiocephaly

The clinical presentation and appearance of most patients with DP is fairly uniform. The typical child develops unilateral posterior skull flattening within the first two months of life, which progressively worsens and is often associated with anterior displacement of the ear, bossing of the ipsilateral frontal bone, and sometimes facial asymmetry. When examined carefully, many young infants with DP also have associated “wry neck”, with limited range of neck motion or torticollis.

Most infants with DP have otherwise normal examinations, but a careful evaluation to search for other associated conditions should be performed.

If recognised early, DP can be effectively treated by keeping the baby’s head from resting on the flattened area as much as possible, by promoting supervised tummy time, and by encouraging neck stretching exercises. With these measures, once babies are able to sit, crawl and walk on their own, their DP has usually improved significantly, with continued rounding of the head occurring over the ensuing years, resulting in most children having minimal residual deformity by school age.

Skull moulding helmets used to reshape the infant’s head have been used for decades, but their widespread use has been questioned because DP is a condition that will improve with the aforementioned techniques in the majority of patients. Cranial orthotic helmets can certainly remould an infant’s head, a concept that was even appreciated in ancient civilisations, but the necessity of using a helmet for a condition that tends to resolve has been carefully scrutinised recently. A recent prospective trial in the Netherlands, where 84 babies with DP were randomly assigned to receive helmets, showed that there was no improvement in head shape at two years in babies who were treated with helmet therapy compared to those who only had the typical repositioning and exercise treatments that are commonly employed. Like all clinical studies, this study has limitations, including the exclusion of babies that have the most severe forms of DP. Until further confirmatory research is completed, we generally recommend helmet therapy only for patients with severe forms of DP or those who have not responded to typical treatment options. Helmet therapy usually lasts three to six months and is best performed between approximately four and 12 months, when the skull has greater malleability and growth potential.

Evaluation and Treatment of Craniosynostosis

CS involving multiple sutures or those forms associated with syndromes result in characteristic patterns of skull and facial deformity that are easily recognised. Patients with these uncommon diagnoses are often recognised shortly after birth and are referred to neurosurgeons, plastic surgeons and other craniofacial surgeons early in life.

Diagnosing CS in much more common – the single-suture, non-syndromic baby is more nuanced, but a clear understanding of the patterns of presentation allows the primary care provider to recognise most patients with CS. In addition to pattern recognition, palpation of the suture in question can aid in the diagnosis: a prematurely closed cranial suture is immobile and a ridge of bone is often palpable.

Surgery remains the treatment of choice for CS, but the surgical options have changed and improved in the past 20 years. CS surgery during the second half of the 20th century consisted primarily of extensive open procedures to remove portions of the skull, orbits or face and to reconstruct these structures in an aesthetically pleasing way, while expanding the skull to allow greater intracranial volume. These open operations are generally performed on children between six and 18 months of age, they last many hours, often required a transfusion and require multiple days of hospitalisation. Results of these procedures are often good, and they remain the mainstay of CS surgical treatment in patients who are not diagnosed early in life.

More recently, minimally invasive techniques have become the treatment of choice for infants with CS in many specialised craniofacial centres worldwide. These techniques involve minimal bone removal in a young infant, typically less than six months of age, with subsequent gradual skull and facial remolding using helmets or internal springs. Compared to the traditional operations of the late 20th century, these minimally invasive procedures are performed through much smaller incisions, result in minimal blood loss, usually don’t require a blood transfusion and typically involve only an overnight hospital stay. These advantages are offset by lack of an immediate improvement in head shape, which often requires many months while the orthotic helmet or spring device slowly changes the child’s head and facial shape as the baby grows.

The most commonly performed minimally invasive technique for CS involves the endoscope assisted removal of the affected suture followed by cranial moulding with an orthotic helmet, which is similar to helmets utilised in cases of severe DP. Since its introduction approximately 20 years ago, this technique has been shown to be very effective in treating all types of single suture CS and its application to multiple suture or syndromic cases has also been explored.

Present and future research will further characterise outcome differences for various surgical techniques. At this time, many neurosurgical CS specialists consider minimally invasive techniques the treatment of choice for majority of patients with CS: those with single suture CS who are diagnosed before four to six months of age. Minimally invasive techniques have also shown promising results when applied to patients with syndromic or multiple suture CS, but craniofacial surgical teams still treat these patients, as well as those diagnosed later in life, with traditional open operations.